John Vincler’s Brush Strokes column explores what we can find in paintings in our increasingly digital world.

I will remember 2020 not as a year of looking but as a year of listening. For months as the pandemic overtook New York, ambulance sirens rang out at strange times in strange choruses. When the sound of the sirens occasionally broke or faded into the distance after dawn, it was replaced not by eerie silence, but by the chirping of birds: the screams of the blue jays, the playful beeps of the sparrows in the bushes, the eeks, chirping, and strangely varied Noises of gurgles everywhere. I then asked myself: Were these noises always here and we were made quiet? I rarely left my neighborhood in Ditmas Park, Brooklyn, except to take my partner Kate, who was pregnant with our second child, to appointments at the Manhattan Hospital Complex, which was itself a swarm of sirens that got louder every time we approached . In my memory, the sirens and chirping of birds followed police helicopters, apparently always overhead, as the city erupted in protests against Black Lives Matter and the violent reaction of the police who only made them move on. The helicopters soared into the sky as I ran over the same weeds in the small lot of our shared backyard, playing a game my four-year-old daughter Leo calls “Dinosaur Hunt” (she’s the dinosaur). I am her lunch). Half the year was marked by sleep disorders – first the constant fireworks at all hours of the night and then until the end of summer the baby’s screeching and cooing without noticing the distinction between day and night. As I write this and collect a year, it is spring again. The neighborhood seems to be returning to an approach to the old noises of yesteryear. That is, if we can remember what it used to sound like. Even the old noises can now be heard differently. With my daughter in her mud boots, bird book and binoculars in hand, while the baby sleeps on Kate’s home, we start our tour every day. Leo collects sticks, stones and seed pods, stomps in puddles, and pauses to chase blue jays in a tree after they stutter loudly.

Last October, I had taken my temperature outside of the Metropolitan Museum of Art. After seeing the line that snaked out for a mile, I immediately wanted to leave. There were a number of reasons why I felt so nervous. I was concerned about the ethics of the visit in general, about the work of the museum worker, a role I had once played and now had to be regularly exposed while they held the thermometer to our foreheads, even the baby’s. I also worried that Leo might have gone wild for most of the year, not spending her days on the college campus where her parents taught or the museums and galleries we went to. I tried to keep her standing on her yellow spot when she excitedly shot away and played in the fountain. The idea was to go on a pilgrimage to experience a shard of the abruptly abbreviated Gerhard Richter show, which closed almost immediately after it opened in March 2020. My distrust of the art press preview had made me wait a lot to see the exhibition below me, and by then it became clear that it was unwise to gather en masse at all. In the months that followed, Manhattan became a place across the river, and its galleries and museums were suddenly incredibly far away.

As I waited in line in October, I carried the experiences of the past few months with me. I had the hope that this series of works – in which an artist whom many would call the greatest living painter addresses the greatest disaster of the 20th century – was exactly what it took to get my attention back to me and to help me rediscover the possibility of painting as a means of talking to moments of crisis. I had previously seen Richter’s 2012 retrospective at the Center Pompidou, a show that showed his inimitable virtuosity in a range of styles and media, from painting to sculpture, even though his work often seemed cool to me, devoid of humanism or – what I picked up then in my notebook –soul, but with a few exceptions mostly found in portraits of his family or confidants. The four canvases at the Met, completed by Richter in 2014, which make up the “Birkenau Series”, were created in response to photographs that were segregated from Auschwitz-Birkenau in August 1944. After studying the paintings, I turned to reproductions which have much more of an impact on source images. The pictures documenting the process of mass murder in the gas chambers of the Nazi concentration camps were taken by a member of the Sonderkommando, a group of mainly Jewish prisoners who were forced to help carry out the atrocities, the caption explained. The high-contrast black and white photos are almost abstractions themselves. The black of a window frame embraces a large part of the pictures and a forest in the middle. The figures are barely noticeable in front of and under the immensity of the trees. In the gallery, the photographs were in such a way that they were not visible when looking at the pictures and vice versa. As I turned from the photos to the four large canvases in black, white, gray, green, silver, and red, I noticed that the pictures themselves revealed essentially nothing of the source images in their smeared and scratched surfaces of chaotic, vague grids. like constructions. I scanned the images and then withdrew to remotely recapture them as a whole. I tried to find a generous reading of this collection of marks and pigments. I felt an unsettling empty feeling alone there in the gallery. When I stood in front of these paintings, I felt no sense of awe or emotion, other than the thought I had expectantly brought into the gallery. I thought to myself, or maybe I even said it out loud: So he paints about atrocities – is that what I see here? These images added nothing but insight and only seemed to undermine the power and testimony of the original photos. Why was I even here? Why did I seek solace in paintings? We were still in the middle of a plague. It felt stupid to be in the midst of the opulence of the Met.

Maybe the problem was mine. Could I see art again? Or rather, would it ever be the same for me after the events of last year? But with attention, art is never the same. Art occupies a weak mean distance between the present state (and the accumulated personal history) and the present cultural moment (as a point in time within history). Every work of art has to present itself between these constantly changing poles. These Richter paintings appeared to be a failed attempt to extend his squeegee technique, used in his great late abstractions, into space of profound meaning through historical association. Perhaps the failure of the Richter paintings is the point. Could an attempt to paint the events in the source photos be successful, and if so what would that mean? Wouldn’t such an attempt essentially lead to atrocities being painted over? But these oversized canvases were neither a memorial to the victims nor an attempt to reckon with the nationalist violence behind the atrocity. Perhaps I was not drawn to the Met that I was looking for an art experience. Maybe I missed the city of which the Met is an integral part. But what I had never considered before, at least as viscerally, was how much the Met as an institution obliterates the lived reality of New York. While in other times this did the Met as a haven or escape for New Yorkers, at that moment I found it alienating.

After seeing the pictures that served as the supposed reason for my trip, I inadvertently wandered to the relocated and re-hung paintings of El Greco with their familiar melancholy faces and elongated hands and the incomparable expressive monochromes of the winding fabrics that light up clothing envelop. Here I saw her for the first time in her new location. 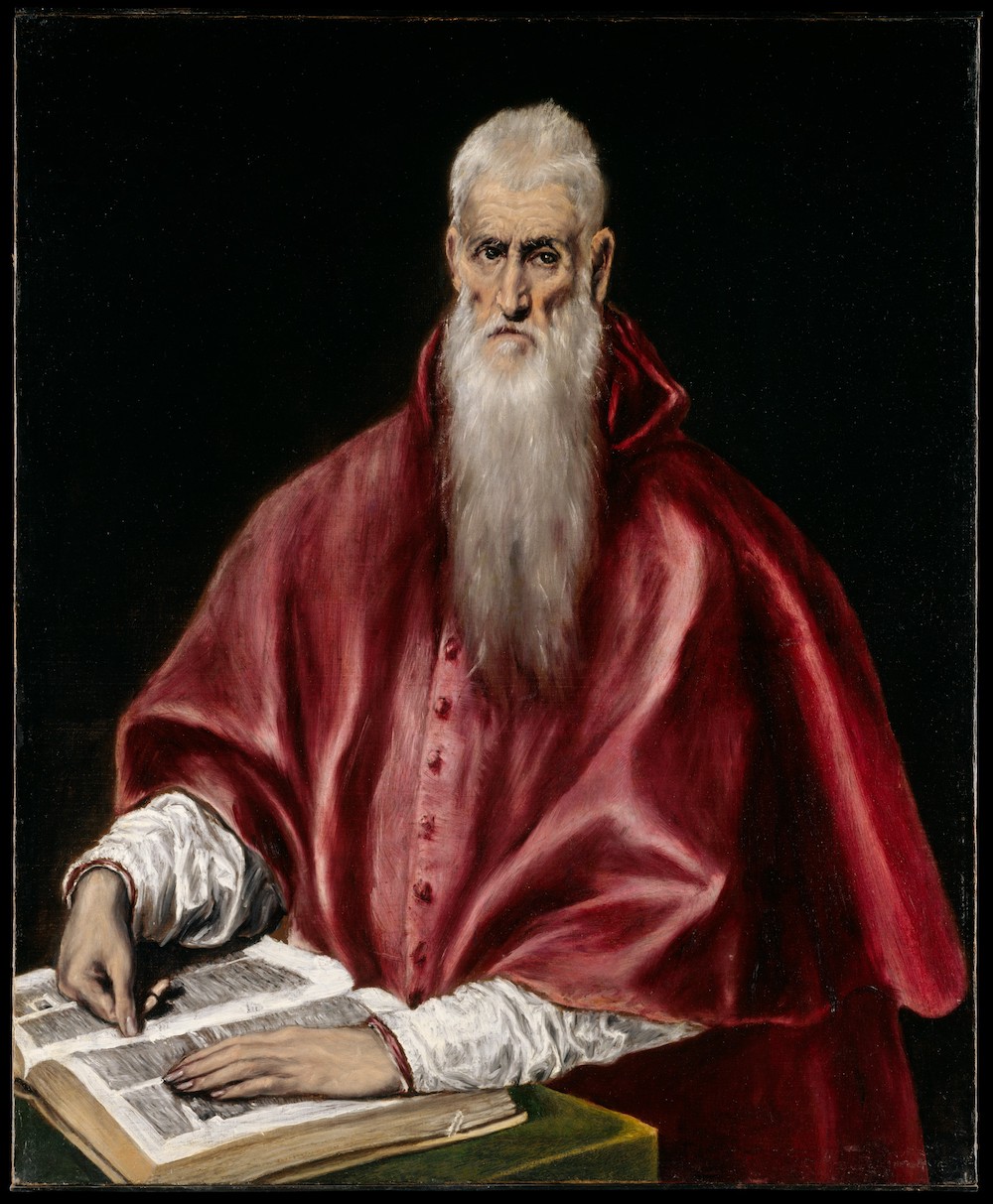 His portrait of St. Jerome “as a scholar” caught my eye, the subject in red robes with a cloak-like cloak from which bright, wrinkled white sleeves emerge, his hands in a book, his right thumb signaled an illegible passage. Saint Jerome is an icon of the solitary work of the scholar, writer or translator, and the possibility that this work be contemplative, meditative and meticulous. I have contrasted this with El Grecos View of Toledowhere the city emerges from the landscape under a looming sky, the clouds cannot suppress the light that filters through their transparent layers and illuminates everything. What generations of mankind had built in the city shown remains dwarfed by the mercury forces of nature. These images soothed me like an old friend who, in a sour mood, could understand and tolerate me through the comradeship of the mutual silence. 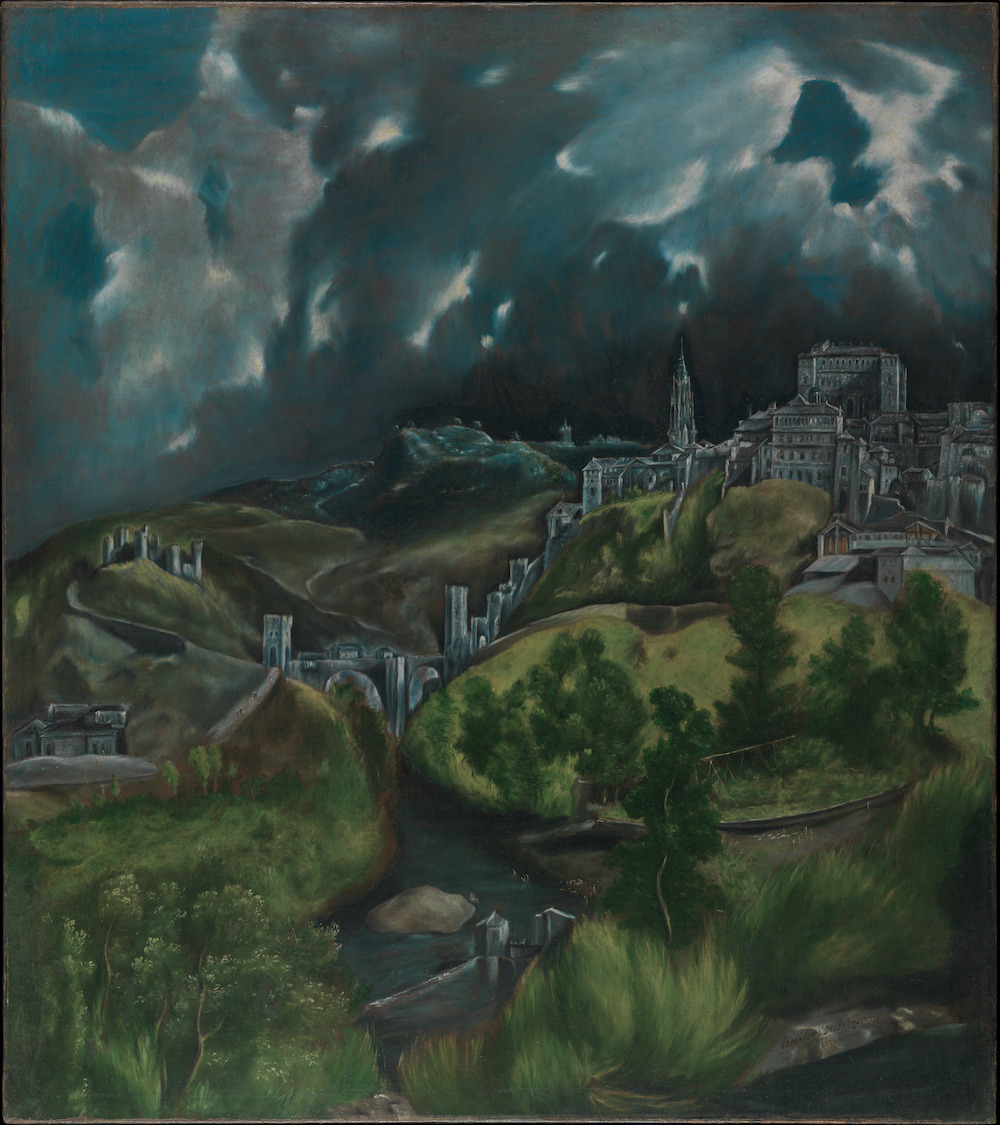 When I met with the rest of my family, left the museum, and went to Central Park, the sounds of traffic quickly gave way to the sounds of birds. I thought of Louise Lawler’s audio work “Birdcalls” (1972/1981), which takes place a few hours north on the train along the Hudson in the garden of the Dia Beacon Museum. Set amidst the chatter of real birds in the garden, the piece performs some sort of audio camouflage as Lawler translates the names of famous male artists into bird calls. “Rick TUHR, Rick TUHR,” she yells – one of about thirty names she goes through in the seven-minute audio loop. I called this to myself in my head and immediately calmed my mood there behind the Met. I listened in a crowded park that was quiet except for the birds. Even if Lawler’s work there only existed in my memory, it was like hearing and understanding it for the first time, and understanding with greater depth how she both pushed the boundaries and undermined the myth of the great painter.

As I walked through the park, I found that the room with the El Greco paintings hung was not included The vision of Saint John, a painting perhaps best known as the role model and inspiration for Picasso’s Les Demoiselles d’Avignon about three hundred years later. In his orgiastic scene I always see the beginning of a kind of abstract painting, a freedom that arises like revelation when the cloth on the blue figure on the left in red, yellow, green and white, naked figures that are happy in front of these dynamic blocks of , color is opened. I thought about when the pandemic would be over, when we could take off our masks and be with each other. And I thought about how museums and paintings can help us, not thinking about what this collective freedom might look like. I listened to the birds.

John Vincler is a writer and visual artist who has worked as a rare book librarian for a decade. He is the editor for visual culture at Music & literature and is working on a book-length project on fabric as a subject and medium in art.

Deborah Harkness’ Witches from Side to Screen by Camille Thompson