By Jack Bezants for MailOnline

Liverpool captain Jordan Henderson won’t play for his club this season but Jurgen Klopp says the midfielder has a chance to come back for Euro 2020.

At his press conference on Wednesday, Klopp said of his captain’s groin problem: “Hendo’s injury is completely different.

“He’s not training or playing right now, so it’s up to Gareth (Southgate) and Hendo to decide. I think there is sure to be a chance (he plays for the euro). Unfortunately not for us, but for England. 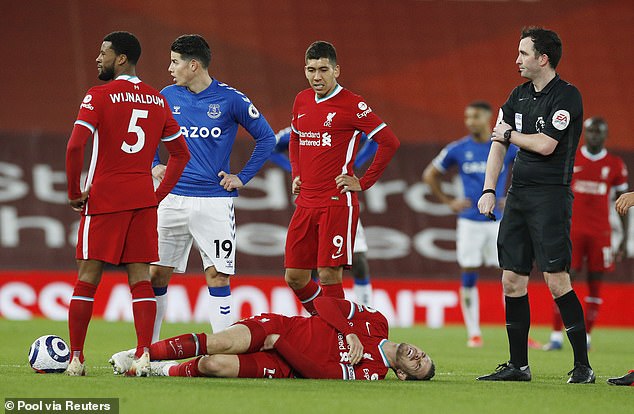 “He hasn’t trained with the team but in the last week (of the season) he will have the chance to train with us and he will be really rested.”

Henderson, 30, sustained an injury in the February loss to Everton at Anfield. His absence for the remainder of the season is a blow to Liverpool’s hopes of finishing in the top four.

It’s another big problem for England boss Gareth Southgate after Manchester United defender Harry Maguire was sent off over the weekend with an ankle injury against Aston Villa. The center-back was on crutches at Old Trafford on Tuesday to watch his team play against his old club Leicester.

The Henderson news comes the day another influential Liverpool player in Virgil van Dijk excluded himself from the summer tournament with Holland.

Van Dijk was injured by Everton goalkeeper Jordan Pickford in October due to a ferocious challenge with an ACL injury.

Klopp said: ‘With Virgil, it’s one of the worst injuries you can get. I don’t know how it came about that he had a chance for the euro because of the average recovery time.

“It’s going really well and we plan to have him back for preseason and even that isn’t certain. Euros were at the wrong moment, but good news for Holland and if he is fit because we can’t force it, it will be 100 percent and the next big tournament for Holland is coming.

‘We have to be patient. For a player to start rehab is very difficult, pain like crazy, you worry.

“Then you take steps and become more positive. Now it relieves Virgil and he can focus on the right things. ‘