A physicist has harnessed the power of artificial intelligence (AI) to resolve the age-old debate about whether Jaffa cakes are cookies or cakes.

Dr. Héloïse Stevance, an astrophysicist at the University of Auckland in New Zealand, trained algorithms on almost 100 recipes for traditional cakes and biscuits.

She then ran two Jaffa Cakes recipes through the algorithms, which she “without a doubt” clearly recognized as cakes.

Jaffa Cakes, made by Edinburgh-based manufacturer McVitie’s, consist of an orange-flavored slice, milk chocolate and a mysterious spongy base.

But fans of the popular British snack have passionately debated whether it is biscuits or cakes because of its unique texture and appearance.

It’s no small matter: The Scottish company McVitie’s has been making Jaffa Cakes since 1927 – but is it biscuits or cakes?

An algorithm is a specific procedure for solving a precisely defined computational problem.

The development and analysis of algorithms is fundamental to all aspects of computer science, such as artificial intelligence (AI), databases, graphics, networks, operating systems and security.

Algorithms support computerized tasks and can be directly applied to a range of settings.

Algorithms currently have no legal definition and their precise nature is a point of contention in computer science.

Dr. Stevance has authored a replicated research paper of their investigation which was pre-released on April Fool’s Day. However, she confirmed to MailOnline that she actually carried out the experiments.

The debate over whether Jaffa cakes are cakes or biscuits is “a major source of disputes among British families,” said Dr. Stevance.

“Some argue that its size and host environment – the biscuit aisle – should make it a biscuit in its own right,” she says in her paper.

Others believe that their physical properties – e.g. They harden rather than soften when stale – which suggests they are actually cakes. ‘

According to Wikipedia, the base of a Jaffa cake, citing an outdated link to the Food Standards Agency, is made from Genoise – a type of Italian sponge.

But the unusual consistency of the base is arguably not soft and spongy enough to compare to other cakes.

Additionally, they’re sold in the biscuit aisle, just 2.125 inches in diameter, and eaten alongside (or in place of) biscuits such as digestives and rich teas.

The disagreement about whether it was biscuits or cakes reached the courts as early as 1991.

McVitie’s, which has been making the orange-flavored delicacy since 1927, was asked by Customs Her Excesty’s Customs and Excise to label their chocolate orange treats as “cakes”.

However, the court ruled in McVitie’s favor that Jaffa Cakes should be considered cake for tax purposes – but the debate continues.

To finally calm it down, Dr. Stevance has two classification algorithms – a random forest made up of multiple decision trees and a support vector machine.

The algorithms were trained on 51 recipes for biscuits and 41 recipes for cakes, including all of their various ingredients, which were defined as either “wet”, “fat” or “dry”.

Two Jaffa Cakes recipes from the Internet – one of them by Mary Berry – were then fed into the algorithms.

Both algorithms predicted that they would be labeled “cake,” found Dr. Stevance.

The forest and support vector random machine classifiers have an accuracy of 95% and 91%, respectively – which almost clearly shows that Jaffa cakes are indeed, as the name suggests, cakes.

Dr. Stevance admitted that her experiments didn’t take into account the size of Jaffa cakes or the host environment (cookie aisle). 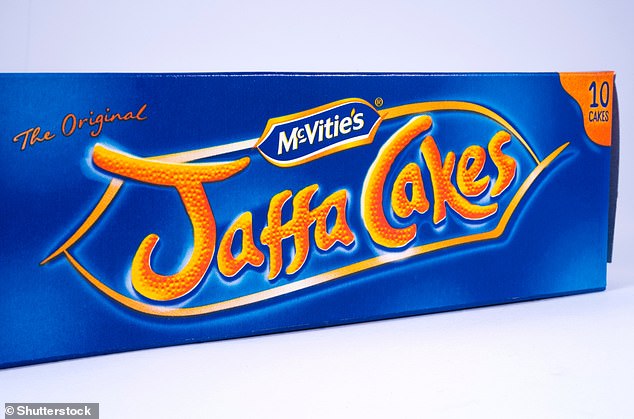 Those who have claimed Jaffa cakes are biscuits have pointed out that they are sold in the biscuit aisle, are only 2.125 inches in diameter, and are eaten alongside (or in place of) biscuits such as digestives and rich teas

However, she points out that many of Mr. Kipling’s cake products are also sold in the biscuit aisle and enjoyed with tea without discussing their nature – while “size does not make the biscuit”.

One of the main differences between Jaffa cake and a traditional cake product, be it a cupcake or a slice of a whole cake, is that the Jaffa cake can be held and dipped on your fingers without leaving a lot of residue, she admits.

“Most cakes will be sticky – so the Jaffa cake eating experience will be more like that of a traditional cookie.”

However, this in no way detracts from the “true nature” of enjoyment – and the fact that Jaffa cakes are cakes excludes them.

One of the limitations of the study is that Dr. Stevance did not use the official recipe from McVitie’s Jaffa Cakes in her experiments.

MailOnline asked her if she would consider doing follow-up experiments with the official recipe if McVitie could provide it to her for scientific reasons.

You ate wrong Jaffa Cakes! McVitie reveals the chocolate is DOWN – but fans aren’t convinced

For a small, harmless treat, Jaffa Cakes can spark a lot of discussion.

Is it a cookie Is it a cake Should you eat all in one or nibble on the edge before the jelly?

These are questions that are asked in households across the UK, and while these questions may always remain a mystery, McVity’s avid fans closed a debate in 2020.

The Edinburgh biscuit company announced that contrary to popular belief, the chocolate is actually on the bottom of the Jaffa cake. 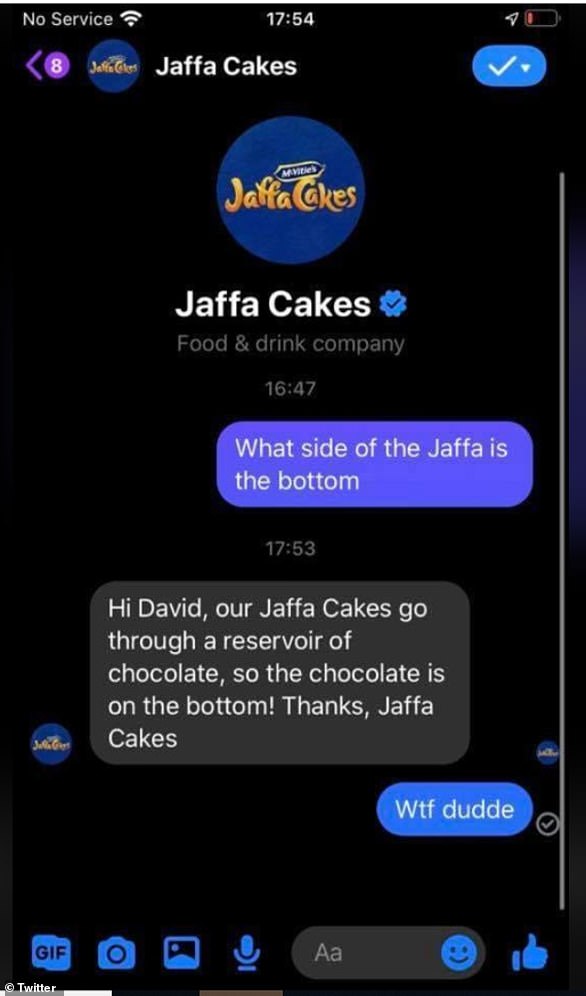 In a screenshot of a Twitter conservation program that is widely used in UK Facebook groups, McVitie’s appeared to have confirmed that chocolate was lying at the bottom of a Jaffa cake

British social media user David said he asked the Jaffa Cake team to use Facebook Messenger to confirm which side of the enjoyment is the top.

In screenshots that have been widely used since then, they said, “Hi David, our Jaffa cakes go through a chocolate reservoir, so the chocolate is the bottom, thank you Jaffa cakes,” to which David quickly replied, “WTF”.

The post was then passed on to the Family Lockdown Tricks and Tips Facebook group, where many disagreed with the news.

‘Lol no, really not to accept that. The cake part is the bottom, ”said one person.

“Oh, that’s like eating a ham salad sandwich with the ham on the bottom and the lettuce on top. All wrong, ”added another.

“I refuse to accept this,” said a third.

‘The bad news just keeps going. What a year, ”wrote a fourth.

“Your own ad shows the chocolate side up on your plate!” a fifth noticed.

Users also went to Twitter to share their shock. With one article they were “horrified” by the news.

The post was then passed on to the Family Lockdown Tricks and Tips Facebook group, where many disagreed with the news

McVitie’s previously slipped into the debate, revealing that not just Jaffa Cakes, but all of their sweet treats have the chocolate on the bottom.

Marketing Director Kerry Owens previously told MailOnline, “When we make our McVitie chocolate chip cookies – whether it’s chocolate hobnobs, chocolate digestive products, or even Jaffa cakes – they go through a chocolate reservoir on the production line.

“This essentially” wraps “the bottom in chocolate – this is how we can confirm that the chocolate is officially on the bottom of the biscuits.”